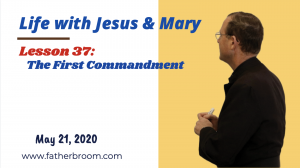 4. How is every sin against the first commandment?

Every sin is forbidden by the first commandment; since in every sin we are placing something else before God.

5. More specifically what does the first commandment forbid?

Sins against hope are presumption and despair.

Sins against love are hatred of God and of our neighbor. The sins against our neighbor are more specifically forbidden by the fourth through the tenth commandments.

Sins of superstition are divination, sorcery, Satanism and the distortion of good religious practices.

Fr. Gabriel Amorth, the official exorcist of Rome noted that Satan gives such powers to people who seek them. He gave examples of people who went to sorcerers for healing. The sorcerer will heal the person for a price. The sorcerer however often puts another curse on the person so that within a year or so they have an illness that is worse than the first. They go to doctors, but the doctors are incapable of curing them. Thus, they come again to the sorcerer for healing. This time the sorcerer says it is a much more difficult case and will cost them even more money. Fr. Amorth met people who had paid sorcerers as much as 35,000 for a single healing. Fr. Amorth noted at times sorcerers will heal people, and the people remain healed. Why would Satan ant to do that? Fr. Amorth responds that God had permitted these persons to receive these illnesses so that they could be brought closer to God, and could unite their sufferings to the sufferings of Jesus to bring others closer to God. Satan knew this, and so he gladly removed the suffering through the sorcerer.

Sins of irreligion are tempting God, sacrilege, and simony

6. Does the first commandment forbid making idols?
Yes, the first commandment forbids the making of idols; that is, it forbids us to make images to be adored or honored as gods, as the pagan nations around Israel had done: “You shall not carve idols for yourselves in the shape of anything in the sky above or on the earth below or in the waters beneath the earth; you shall not bow down before them or worship them.” (Exodus 20: 4-5)

While forbidding the making of idols (Exodus 20:4-5), God in the same book of Exodus commanded the Israelites to make golden images of cherubim (angels ) that were to be placed next to the Ark of the Covenant. (Exodus 25: 18)

8. Does God approve of the images of Our Lord, Mary and the saints?
Yes, these images are pleasing to God when they are used properly.

To God alone and to Jesus, who is God, is given the honor of adoration. Adoration is called “latria.”

To the saints, who are the friends of God, the temples of God, and who participate in the holiness of God, we give the honor of veneration. When we venerate the saints, we are honoring God even more, because it was God who made them so holy . Veneration is called “dulia”.

Since the Blessed Virgin Mary is holier than all the other angels and saints combined – God mad her so holy because she was to be the worthy Mother of God – we give her a special veneration. This special veneration is called “hyperdulia.”

Reading the lives of the saints helps us to become enthusiastic about living a holy life. Most saints were greatly helped in becoming saints by reading the lives of other saints. St Ignatius of Loyola was one of them. HE was a very courageous soldier who had been shot in the leg while defending a city. While recovering from the wound he read the lives of some of the saints. He began to think, “If St Francis and St. Dominic could do these great things for God, why can’t I?” As a result of this good reading he began to imitate the saints and became that saint that God was calling him to become. We can do the same.

St. Dominic said on his death bed, “Do not weep, for I shall be more useful to you after my death and I shall help you then more effectively than during my life.”

St. Therese of Lisieux said, “I want to spend my heaven in doing good on earth.”

St. Peter Chanel had always had a deep love and devotion to the Blessed Virgin Mary. While in the Seminary in France, he wrote what was to always remain his life’s goal, “To love Mary and to make her loved.” He knew that through Mary, Jesus would be even more known and loved. HE was ordained to the priesthood in 1927, and began his priesthood in a parish in France. He desired however to be a missionary in a far off land that had never received the Gospel. In order to do this he joined the newly founded religious Congregation of the Marist, and immediately asked permission to work in the foreign missions. He was sent to the Island of Futuna where he worked with the Marist Brother Maria Nazario. As soon as they arrived on the island they set up a statue of Mary, and consecrated the island, its inhabitants, and all their work to her.

The people were under the influence of the devil. They practiced cannibalism not only on their enemies but also on the members of their own tribe. The people also had idols of their gods that they worshiped. The worst of these gods was “Fakavelikele”, which means “he who make the earth bad.” To appease this god the people offered him human sacrifices. The Marist threw the idols of Fakavelikele and the other gods into a fire while invoking Our Lord and Our Lady’s help.

At first the people were terrified, but when they saw that nothing happened to the missionaries, they began to question their gods, and to show they joy and admiration for the missionaries. This popularity did not remain. After the conversion of the king’s son and daughter, some of the warriors attacked St. Peter Chanel and killed him. At his death, he was heard to say in the warriors’ own language, “This is good, this is a great good for me.” Within a couple of years of his death, because of the sacrifice of his life and his prayers in heaven, the whole island became Catholic. He was able to do more from them in heaven, than he was while on earth.