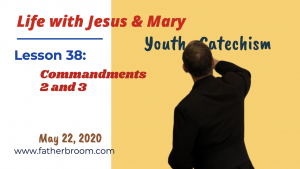 Although he was only 15 years old when he died St. Dominic had acquired a deep holiness of life. Among his proposals that he made at his First Communion were, “Death rather than sin;” and “Jesus and Mary will always be my best friends.”

St. Dominic loved and respected the name of Jesus. Whenever he heard someone taking the Lord’s name in vain, he would bow his head and immediately say in his heart, “Praised be Jesus Christ.” He would ten tell the person to stop offending God by speaking in this manner.

5. What is blasphemy?
Blasphemy is an expression, which is hateful or insulting to God. IT is a mortal sin when the blasphemer really intends to insult or hate God.

6. What is an oath?
An oath is calling on God to witness to the truth of what we say. Examples of oaths would be: “So help me god,” “Honest to God,” “By God,” “Te lo juro por Dios.” Many do not mean these as oaths but that is what they are.

A vow is a promise made to God to do something better than what is strictly required.

A person should not make a vow without talking to a priest first. Making a vow is something serious. If someone has made a vow, and is not able to fulfill it, a priest in Confession is able to change the promise to some other good action.

The Name of Jesus is very powerful. When His Name is spoken in faith, Jesus Himself becomes present. St. Ignatius experienced this in a very powerful way. On one occasion Our Lord brought a person back to life again when Ignatius called upon His Name. The man, named Lessani hanged himself after losing a lawsuit. Suicide is a mortal sin, and this was the very last act of this man’s life.

Ignatius cut him down, but efforts to revive him failed. Ignatius prayed in tears, sorrowing that a man should die in such a manner. Then he arose and pronounced over Lessani the Holy Name of Jesus. Lessani opened his eyes, and expressed sorrow over his action. He then received the Sacrament of Confession. Soon afterwards he died. This account was made by eye-witnesses under oath. St. Ignatius’ love for the Name of Jesu led him to name the religious order he founded, “The Society of Jesus.”

13. What does the third commandment command?
By the Third commandment we are commanded to worship God by going to the Mass on Sunday. Not going to Sunday Mass is a mortal sin, unless one is excused for a serious reason, such as illness.

Sunday is to be a day of rest and joy. In order to experience the rest and joy that Our Lord wants to give, besides going to Sunday Mass, one should spend more time in prayer, reading the Bible, or the lives of the saints.

It is also good to spend time with family and friends, to study, or simply to rest. Traditionally Sunday is also a time to humbly serve the poor, the sick, and the elderly, who are not able to rest because of poverty or misery.

St. Juan Diego walked 9 miles every Sunday to get to Mass. He never wanted to miss Mass on Sunday. Since the third commandment commands us to go to Mass every Sunday. He also went to Mass on Saturday mornings. It was while walking these 9 miles to Mass on a Saturday morning, December 9, 1531, that he first saw the Blessed Virgin Mary. After the apparitions of Mary he began to go to Mass every day.

14. What are the other holy days of obligation?

Examples of work that is necessary, and thus may be done on Sunday are the work of policemen, firemen, nurses, bus drivers, restaurant workers etc. Necessary work at home, such as cooking or washing dishes is also allowed.

Examples of work that should not be done on Sunday without real necessity are: scrubbing floors, painting the house, working in stores, factory work etc.

On September 19, 1846 in La Salette, France, the Blessed Virgin Mary came from heaven to remind us of the importance of using the name of God with reverence and keeping the Lord’s Day holy. She appeared to two children, Melanie Mathieu, aged 14, and Maximin Giraud, aged 11. Both of them lived in a village about 1000 people called Corps, in France.

Maximin and Mellanie had never received their First Communion. They did not go to Mass on Sunday and they prayed very little.

Many people in the village of Corps and in many other villages in France were working on Sunday and not attending Sunday Mass, they were not doing penance during Lent, they were not praying very much, and they were blaspheming and taking the Lord’s name in vain.

When Maximin and Mellanie first saw Our Lady that Saturday afternoon she was surrounded by light, seated upon a rock and weeping, with her face in her hands. As they approached her, she stood up. With tears in her eyes she told them that France was going to be punished with a great famine because of the sins of using the Lord’s name in vain, working on Sunday, and not attending Sunday Mass. She told them if men converted the famine would cease and there would be an an abundance of food.

As a result of the apparitions the children made their first Communion, egan to pray and to live better lives. Many people believed the children and began to go to Sunday Mass. They made good confessions, stopped working on Sunday, began to pray more, and stopped taking the Lord’s name in vain.