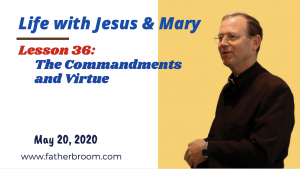 LESSON 36: The Commandments and Virtue

Complete and total happiness will come only when we are united with Im in heaven, and through Him come to see the Face of God. Of seeing the Face of God St. Paul wrote, “Eye has not seen nor ear heard, nor has it entered into the hearts of men what God has prepared for those who love Him.” (1 Corinthians 2:9)

2. How do we obtain union with God in this world and as a result reach heaven?

We obtain union with God through the Sacraments, prayer, and loving Him.

4. How do we love God?
We love Jesus by keeping his commandments and by practicing virtue. He said, “If you love Me, you will keep my commandments.” (John 14:15)

THE COMMANDMENTS OF GOD

If we sin, Jesus will forgive us if we are sorry and try again to observe the commandments. Jesus forgives us in the Sacrament of Confession. In that moment we become good again. Jesus is pleased when we trust in his mercy for the sins we have committed and we try to live a holy life with the help of his grace.

6. Which of the commandments is the greatest?

9. Name the ten Commandments.
1. I am the Lord your God. You shall not have other gods before me.

2. You shall not take the Lord’s name in vain.

4. Honor your father and your mother

5. You shall not kill

6. You shall not commit adultery

7. You shall not steal

8. You shall not bear false witness against your neighbor

9. You shall not covet your neighbor’s wife

10. You shall not covet your neighbor’s goods

THE COMMANDMENTS OF THE CHURCH

17. What are the chief precepts of the Church?

1. You shall attend Mass on Sundays and Holy Days of obligation. The following are the hoy days of obligation in Los Angeles: Christmas (December 25); Mary’s Assumption into heaven (August 15); All Saints’ Day (November 1); and the Immaculate Conception (December 8). Christmas and the Immaculate Conception are holy days of obligation even when they fall on a Saturday or on a Monday. The other two are not holy days of obligation if they fall on a Saturday or on a Monday.
2. You shall confess your sins at least once a year. This strictly obliges only if one has consciousness of having committed a mortal sin.
3. You shall humbly receive Your Creator in Holy Communion at least during the Easter Season. Not receiving Holy Communion at least once a year is a sign that a person is seriously neglecting his eternal salvation. In order to reach heaven, we must receive Holy Communion: “Unless you eat the flesh of the Son of Man and drink his Blood, you do not have life within you.” (Jn 6:53)
4. You shall keep holy the holy days of obligation.
5. You shall observe the prescribed days of fasting and abstinence. Those who are 14 and older have the duty to abstain from meat on Ash Wednesday and every Friday during Lent. Those who are between the ages of 18 and 59 also have the duty to fast on Ash Wednesday and Good Friday. Fasting means that we take one normal meal; and that we have no more than two other snacks which do not add up to more than one meal.
6. The faithful also have the duty of providing for the material needs of the Church, each according to his abilities.

18. What are the natural moral virtues?
Moral virtue are habits that are acquired by repeating good actions. These virtues, once acquired, make both us and our actions good. It is not always easy to form these moral habits, but once formed they make living a good life easier and more joyous. For instance, a person who had found it difficult to ray for even 10 minutes, and who perseveres in praying, will eventually find it easy to pray for much longer periods of time.

21. How do prudence, justice, fortitude and temperance help us to lead morally good lives?

22. What are some of the other moral virtues?

– Obedience is the good habit of doing the will of our parents and those in authority over us.

–  Sincerity is the good habit of telling the truth.

Chastity or purity is the good habit of being pure in mind and body. It says, “No” to selfish desires in order to say, “Yes” to the dignity of the person – both your own and others. It refuses to “use” a person. There is no authentic love without chastity.

23. How do we grow in the natural moral virtues?
We grow in natural virtue by repeating the acts of that particular virtue.

For instance, the more we help others immediately and cheerfully when asked to do so, the more we will have the virtue of generosity. A person who is generous helps others when asked with joy and with ease. HE does so without giving it much thought. It becomes natural for him to do so.

26. What can a bad person do to become good?
Using the above example of someone who has the vice of lying, when the person is sorry for his sins, and makes up his mind that he wants to be virtuous with the help of God’s grace at the moment he becomes good. Nonetheless it will not be easy for him to tell the truth, since he does not possess the virtue. In fact on occasions he will probably tell lies without even thinking since he has the vice of lying. With constant effort, with prayer, and with the sacraments he can grow in the virtue of truthfulness. Eventually he will find joy and ease in being truthful.

With much effort and prayer, Matt Talbot overcame the vice of drinking, and he acquired the virtue of sobriety, as well as many other virtues. The following is his story.

Matt was born into a poor family in Dublin. After only one year of school he left school to begin working with wine merchants. Some crates used to be damaged and the workers helped themselves to some beer. One day Matt sampled a bottle. He liked it. He was only twelve years old. Soon he began to open more and more bottles. The first thing he thought about when he awoke in the morning was getting something to drink. He did his best to hide his drinking problem from his parents, but they eventually found out about it. His father had him change his job, hoping that this would help him. Matt became a bricklayer. The only difference was that Matt was now buying his alcohol. He began drinking whiskey and would regularly arrive home at 1 or 2 AM after he had been drinking for many hours. His mother was constantly praying for him and deep inside he began to cry and beg God for help, but he was not ready to receive it yet.

His conversion began in this way. It was early 1884 and Matt was 28 years old. He had been drinking for sixteen years. One evening he was without money and none of is friends bought him a drink. He went home. His mother noting that he was home early and that he was sober asked him what had happened. He said to her, “I’m going to stop drinking.” She responded, “Don’t’ take the pledge to stop drinking if you don’t’ intend to keep it.” He went to the Seminary of Dublin and there he found a priest before whom he made the pledge not to drink. He felt like turning around and going home. It had been three years since his last Confession and he had been drinking every single day since then. A kind priest helped him and he went to Confession and made the pledge. Those first three months seemed like an eternity. It was very difficult. He realized that he needed special strength. Since he began work at 6AM, he went to the morning Mass at 5AM. HE went to Mass every single day for the rest of his life. Staying away from the pub and his drinking friends meant taking another route home every day. Since he had received very little sleep in order to maintain his drinking habit, he continued to sleep very little after his conversion; but now he filled his time with spiritual reading and prayer. He especially loved reading the lives of the saints. On several occasions in that first period he almost returned to drinking. He had tremendous headaches and emotional turmoil. At one point he was in such a bad state that he prostrate himself on the floor of the Church begging Jesus in the Blessed Sacrament to help him. Our Lord helped him through the crisis. Having remained sober for three months he took the pledge for another three months. His thumping headaches and emotional turmoil began to subside and he began to feel hope. His sister Mary was convinced of his conversion because since he had stopped drinking he had also stopped cursing.

At the end of the second three-month period he took the pledge for a year; and at the end of the year he took it for life. He consecrated himself to Mary, was very devoted to the rosary and adoration of the Blessed Sacrament. He came to spend hours in prayer. For the Blessed Virgin he wanted to remain pure and unmarried.

Formerly he had had a quick temper, especially after he had been drinking. With effort and the help of God’s grace he started to have a very meek and gentle character. Although he was friendly he would not tolerate people using the Lord’s name in vain. Whenever someone would do so, he would take a crucifix out of his pocket and say, “Look at the One you are insulting.”

He gave much of what he earned to charities.

He wanted to do penance for his sins. Besides giving up drinking he also gave up smoking. He slept on boards with a block of wood for his pillow, and put holes in the trousers of his knees so that when he knelt he would have no cushion. He fasted a great deal and ate only the food that he strictly needed. The extent of his penances was only discovered at his death, when it was found that he had worn chains that were embedded into his body. He died on his way to Sunday Mass on June 7, 1925.

He was declared Venerable in 1973, the first step towards sainthood. His life shows us the tremendous struggle that is involved in overcoming vice and acquiring virtue, but it shows us as well that such a victory is possible with the grace of God.