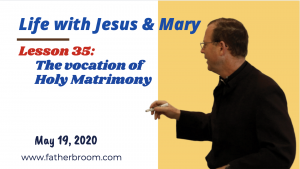 Lesson 35: The vocation of Holy Matrimony

The married couple is called to procreate and educate children:“God blessed them, saying to them: ‘Be fertile and multiply; fill the earth and subdue it.’” (Genesis 1:28)

The married man or woman is called to help his or her spouse.“Then the Lord God said, ‘it is not good that man should be alone; I will make him a helper fit for him’” (Genesis 2:18)

Indissolubility means that husband and wife are to stay together and remain faithful to one another until death.“A woman is bound as long as her husband is alive, but if her husband dies, she is free. Let her marry whom she pleases, only let it be in the Lord.” (1 Corinthians 7:39)

4. Did Christ elevate marriage to a Sacrament?
Yes, Christ made marriage a sacrament.

“Husbands, love our wives, even as Christ loved the church and handed himself over for her.” (Ephesians 5:25)

6. What is necessary for a Catholic to be validly married?
To be validly married a man and a woman, who are legally capable of marrying, must feely consent to give themselves to each other fo the purpose of establishing a marriage:

If Catholics are married in a civil ceremony nothing happens. They are not really married in the eyes of God and commit a mortal sin every time they have sexual relations together. Such a couple must either separate or be married in the presence of a Catholic priest.

The state does not have the power to divorce a couple who have a sacramental marriage. If the man or woman joined by the Sacrament of Matrimony divorce and marry someone else in a civil ceremony, they commit adultery.

“Therefore, what God has joined together no man must separate.” (Mark 10:9)

11. Is marriage really a vocation from God?
Yes marriage is a vocation from God. “Do not be afraid; for she was set apart for you before the world existed.” (Tobit 6:18) The archangel St. Raphael said these words to Tobiah, who was called by God to marry Sarah. St. Raphael was sent by God from heaven to arrange the marriage. Between Tobiah and Sarah.

14. At what point should a person begin honest courtship (dating)?
Since dating is about finding the person you want to marry, a person may begin dating when he or she is ready to marry. In practice, this means:

“Complete your outdoor tasks, and arrange your work in the field; afterward you can establish your house.” (Proverbs 24:27)

15. What about dating for high school students?
Dating exclusively and steadily one person while in high school is a very bad idea. Don’t do it.

Most High School students who date steadily and exclusively one person normally commit mortal sins, and deeply regret their mistakes later in life.

Since dating is about finding the person you want to marry, and high school students are too young to marry, dating steadily and exclusively one person should not be done in high school. There is no reason to commit yourself “artificially” to one person. Group dating is a much better idea. You should have groups of friends of both sexes and spend time together as a group, so that you can get to know a lot of members of the opposite sex in an informal, low-pressure way.

16. What actions are immoral while dating?
Any word, way of dressing, acting, or touching while directly seeks to bring forth sexual pleasure in oneself or the other person is objectively a mortal sin.

If a couple is together and unintentionally becomes aroused, they have the duty to back off from each other.

Some actions, such as open mouth kissing and intentionally touching sexual areas of the other person’s body, by their very nature bring forth sexual pleasure and thus are mortal sins. These actions prepare the body for sexual intercourse, and thus are permissible only in the context of the sacrament of matrimony.

Alcoholic beverages should never be consumed while dating. Many people who were really committed to remaining pure ended up having sex because they were drinking. Obviously the same holds true for drugs.

The use of pornography, which is a mortal sin, almost inevitably leads to other mortal sins. When someone who is dating is viewing pornography, it is almost impossible to avoid serious sin in the dating relationship. The person who uses pornography is more tempted than others to sin against purity.

17. What are the best ways for those in honest courtship to show their love for one another?

The ideal is not to kiss or touch. When passions are aroused, it is very difficult to stop. For those in honest courtship, the best way to show love or one another is by speaking kindly, listening to one another, being kind and helpful, giving gifts, and praying for and with one another etc. This is an art that has to be learned, and the better it is learned before the marriage begins, the strong the marriage will be.

18. What effects does purity have on dating relationship?

Honest Courtship practice with purity is a source of joy, and the perfect preparation for a holy and happy marriage. If the couple does eventually break up because marriage was not God’s will, they are profoundly grateful that they never sinned. A person clearly sees then what a tragedy it would have been.

Sexual immorality on the other hand produces misery, tension, and fighting.

Why? Because sexual activity creates a deep emotional bonding and expresses the complete gift of one’s life to another. When this happens outside of marriage ti becomes a source of anxiety. They have given themselves completely to this other person, but they are not in a relationship where that gift can be protected. They could eventually break up – in this case the total gift of self would mean a total rejection of self. This realization leads to insecurity and fear. This insecurity and fear leads to jealousy, possessiveness, and clinginess. This leads to fighting, where he is often mad, and she is often crying. Only a sacramental marriage can safeguard and protect that complete gift of self that is symbolized by the sexual act.

This emotional, heart-felt bonding is greatest in the person’s first willed sexual relation. God created he human person in this way. God meant the first sexual relation of a person to be with his or her spouse in the sacrament of marriage. This is a gift from God to help the couples to be united to one another in the depths of their hearts and to be faithful to one another for the rest of their lives.

If someone has made a mistake in this area, there is secondary virginity. God always forgives, and a person can make the proposal to begin again.

21. How does premarital sex hurt a couple’s capacity to discern God’s will?

The emotional bonding produced by sexual relations clouds a person’s judgment. His or her heart is attached to the person, even though good judgement would clearly exclude her or him as a person to marry. For example, a woman in a horrible dating relationship with a man who is abusive an alcoholic, without work, and irresponsible will at times want to continue with him, or will convince herself that she can change him. She makes these bad judgments because of the emotional attachment that sexual relations produce.

In choosing the person to marry, it is necessary to use, not just the heart, but also the mind. “Can I live with this person for the rest of my life?” “Does he share my faith and my values?”  “What is his or her family like?” “What kind of mother or father will this person be?” With the bond already formed through sexual activity, the heart and feelings cloud the mind’s capacity to make good judgements.

When couples are chaste their minds are clearer to reflect on whether this is the proper person to marry and have a family with for the rest of their lives.

22. Can a certain bonding take place even when there is a sexual activity short of sexual intercourse?
A certain emotional bonding takes place even in sexual activity which falls short of intercourse. Mary Beth Bonacci notes the following: “Most single people have, at one point or another, started dating someone and thought immediately, ‘This is not the right one.’ Then, after that first passionate kiss, they say to themselves, ‘Well, maybe this cold work ut after all.’ Six months later they are still In this relationship that isn’t working, and they realize they had been right in the first place.” The passions cloud the mind.

23. What is meant by chivalry?
Chivalry meant the art of being a knight at the service of a King or Queen. It gradually came to mean a noble and courteous way for men to act in their relations with women.

Louis Martin and Elie Guerin had a great love for God and thus for purity and virginity when they were young Purity is often seen as a big “No,” but it is actually a big “Yes” to the dignity of the other person. To do this a person has to say “No” to his or her selfish desires. There is no real love without purity.

One day while crossing the bridge of St. Leonard, Zelie saw Louis for the first time. Upon seeing him she heard in her heart, “This is he whom I have prepared for you.” A meeting between the two was arranged by the mother of Louis. The two did not take long to recognize that god was calling them to marriage. As St. Raphael the archangel had told Tobiah concerning his future wife Sarah: “Do not be afraid; for she was set apart for you before the world existed.” (Tobit 6:18)

In the period before his marriage Louis studied a great deal about the Sacrament of Matrimony. HE and Zelie, after some discussion and prayer, decided to live a virginal matrimony like St. Joseph and the Blessed Virgin had done. Having had such a chaste dating period, the couple found much peace and joy in their relationship. Tis way of beginning their marriage – like Joseph and Mary- was a providential preparation for the birth of their children, who would be deeply united to Christ.

After living their marriage for 10 months without sexual relations God began to place within their hearts another holy desire. As Zelie later wrote: “I wished to have many (children) in order to bring the up to Heaven.” With the help of a priest they came to recognize this as God’s will.

Each child was baptized either on the day of birth or the day after, in order to ensure that the child would enter into Heaven even if he or she died prematurely. The couple had much to suffer. Although they had nine children, four died as children or infants. Having been baptized they soon had four little saints in heaven. Only five girls grew to adulthood. All five girls entered religious life, and were noted for their holiness. One of them became St. Therese of Lisieux.