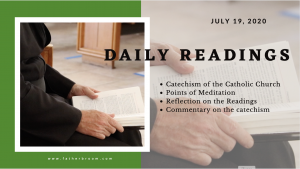 There is no god besides you who have the care of all,
that you need show you have not unjustly condemned.
For your might is the source of justice;
your mastery over all things makes you lenient to all.
For you show your might when the perfection of your power is disbelieved;
and in those who know you, you rebuke temerity.
But though you are master of might, you judge with clemency,
and with much lenience you govern us;
for power, whenever you will, attends you.
And you taught your people, by these deeds,
that those who are just must be kind;
and you gave your children good ground for hope
that you would permit repentance for their sins.

Brothers and sisters:
The Spirit comes to the aid of our weakness;
for we do not know how to pray as we ought,
but the Spirit himself intercedes with inexpressible groanings.
And the one who searches hearts
knows what is the intention of the Spirit,
because he intercedes for the holy ones
according to God’s will.

Jesus proposed another parable to the crowds, saying:
“The kingdom of heaven may be likened
to a man who sowed good seed in his field.
While everyone was asleep his enemy came
and sowed weeds all through the wheat, and then went off.
When the crop grew and bore fruit, the weeds appeared as well.
The slaves of the householder came to him and said,
‘Master, did you not sow good seed in your field?
Where have the weeds come from?’
He answered, ‘An enemy has done this.’
His slaves said to him,
‘Do you want us to go and pull them up?’
He replied, ‘No, if you pull up the weeds
you might uproot the wheat along with them.
Let them grow together until harvest;
then at harvest time I will say to the harvesters,
“First collect the weeds and tie them in bundles for burning;
but gather the wheat into my barn.”’”

He proposed another parable to them.
“The kingdom of heaven is like a mustard seed
that a person took and sowed in a field.
It is the smallest of all the seeds,
yet when full-grown it is the largest of plants.
It becomes a large bush,
and the ‘birds of the sky come and dwell in its branches.’”

He spoke to them another parable.
“The kingdom of heaven is like yeast
that a woman took and mixed with three measures of wheat flour
until the whole batch was leavened.”

All these things Jesus spoke to the crowds in parables.
He spoke to them only in parables,
to fulfill what had been said through the prophet:
I will open my mouth in parables,
I will announce what has lain hidden from the foundation
of the world.

Then, dismissing the crowds, he went into the house.
His disciples approached him and said,
“Explain to us the parable of the weeds in the field.”
He said in reply, “He who sows good seed is the Son of Man,
the field is the world, the good seed the children of the kingdom.
The weeds are the children of the evil one,
and the enemy who sows them is the devil.
The harvest is the end of the age, and the harvesters are angels.
Just as weeds are collected and burned up with fire,
so will it be at the end of the age.
The Son of Man will send his angels,
and they will collect out of his kingdom
all who cause others to sin and all evildoers.
They will throw them into the fiery furnace,
where there will be wailing and grinding of teeth.
Then the righteous will shine like the sun
in the kingdom of their Father.
Whoever has ears ought to hear.”

47 The Church teaches that the one true God, our Creator and Lord, can be known with certainty from his works, by the natural light of human reason (cf. Vatican Council I, can. 2 # 1: DS 3026)

SUNDAY, JULY 19TH   Mt. 13: 24-43   “The kingdom of heaven is like a mustard seed that a person took and sowed in a field. It is the smallest of all the seeds, yet when full-grown it is the largest of plants. It becomes a large bush, and the ‘birds of the sky come and dwell in its branches’”

(Adapted from a writing by an unknown author)

The Mystery of a Seed…  Reflection by Ann Voskamp

“Joshua, can you bring another spade?” I call to him across the lane, coming out of the barn, coming from feeding all the nursing sows. We’re breaking the earth open and it’s making something in me heal.

The seeds, they fall into my hand, small jewels. I am holding seeds, first gift He ever bestowed upon His people. Maybe this is why the bare feet? But to look at seeds and believe He will feed us? When what He gives doesn’t look like near enough? When it looks like less than a handful instead of a plateful, a year full, a life full. When it looks inedible. These seeds, they are food? It looks like a bit of a joke. To hand someone seeds for his swelling, panging starvation, and ask him to believe in a feast – is this what everyday faith is?

Behold! For those who have learned to see – He gives, He gifts. He gifts with seeds as small as moments, grace upon grace; and the unlikely here and now, it shall sustain you, feed you. Do not disdain the small. The promise of feast is within the moments. Our enough is always in the now, because He never leaves us….

Lord, what would happen today if I saw all the not-enough, too-little in my life to be but a seed? All the hardly-things could be holy-things – small somethings you are growing into more glory for you. Cause me to believe again: All feasts began as seeds.

End of Reflection (Ann Voskamp is a wife, mother of seven, spiritual writer and author.)