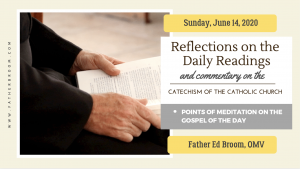 Solemnity of the Body and Blood of Christ

Moses said to the people:
“Remember how for forty years now the LORD, your God,
has directed all your journeying in the desert,
so as to test you by affliction
and find out whether or not it was your intention
to keep his commandments.
He therefore let you be afflicted with hunger,
and then fed you with manna,
a food unknown to you and your fathers,
in order to show you that not by bread alone does one live,
but by every word that comes forth from the mouth of the LORD.

“Do not forget the LORD, your God,
who brought you out of the land of Egypt,
that place of slavery;
who guided you through the vast and terrible desert
with its saraph serpents and scorpions,
its parched and waterless ground;
who brought forth water for you from the flinty rock
and fed you in the desert with manna,
a food unknown to your fathers.”

R.  (12) Praise the Lord, Jerusalem.
or:
R.  Alleluia.
Glorify the LORD, O Jerusalem;
praise your God, O Zion.
For he has strengthened the bars of your gates;
he has blessed your children within you.

R.  Praise the Lord, Jerusalem.
or:
R.  Alleluia.
He has granted peace in your borders;
with the best of wheat he fills you.
He sends forth his command to the earth;
swiftly runs his word!

R.  Praise the Lord, Jerusalem.
or:
R.  Alleluia.
He has proclaimed his word to Jacob,
his statutes and his ordinances to Israel.
He has not done thus for any other nation;
his ordinances he has not made known to them. Alleluia.

Laud, O Zion, your salvation,
Laud with hymns of exultation,
Christ, your king and shepherd true:

Bring him all the praise you know,
He is more than you bestow.
Never can you reach his due.

Special theme for glad thanksgiving
Is the quick’ning and the living
Bread today before you set:

From his hands of old partaken,
As we know, by faith unshaken,
Where the Twelve at supper met.

Full and clear ring out your chanting,
Joy nor sweetest grace be wanting,
From your heart let praises burst:

For today the feast is holden,
When the institution olden
Of that supper was rehearsed.

Now the new the old effaces,
Truth away the shadow chases,
Light dispels the gloom of night.

What he did at supper seated,
Christ ordained to be repeated,
His memorial ne’er to cease:

And his rule for guidance taking,
Bread and wine we hallow, making
Thus our sacrifice of peace.

This the truth each Christian learns,
Bread into his flesh he turns,
To his precious blood the wine:

Sight has fail’d, nor thought conceives,
But a dauntless faith believes,
Resting on a pow’r divine.

Here beneath these signs are hidden
Priceless things to sense forbidden;
Signs, not things are all we see:

Blood is poured and flesh is broken,
Yet in either wondrous token
Christ entire we know to be.

Whoso of this food partakes,
Does not rend the Lord nor breaks;
Christ is whole to all that taste:

Thousands are, as one, receivers,
One, as thousands of believers,
Eats of him who cannot waste.

Bad and good the feast are sharing,
Of what divers dooms preparing,
Endless death, or endless life.

Life to these, to those damnation,
See how like participation
Is with unlike issues rife.

When the sacrament is broken,
Doubt not, but believe ‘tis spoken,
That each sever’d outward token
doth the very whole contain.

The shorter form of the sequence begins here.

Lo! the angel’s food is given
To the pilgrim who has striven;
see the children’s bread from heaven,
which on dogs may not be spent.

Very bread, good shepherd, tend us,
Jesu, of your love befriend us,
You refresh us, you defend us,
Your eternal goodness send us
In the land of life to see.

You who all things can and know,
Who on earth such food bestow,
Grant us with your saints, though lowest,
Where the heav’nly feast you show,
Fellow heirs and guests to be. Amen. Alleluia.

Jesus said to the Jewish crowds:
“I am the living bread that came down from heaven;
whoever eats this bread will live forever;
and the bread that I will give
is my flesh for the life of the world.”

The Jews quarreled among themselves, saying,
“How can this man give us his flesh to eat?”
Jesus said to them,
“Amen, amen, I say to you,
unless you eat the flesh of the Son of Man and drink his blood,
you do not have life within you.
Whoever eats my flesh and drinks my blood
has eternal life,
and I will raise him on the last day.
For my flesh is true food,
and my blood is true drink.
Whoever eats my flesh and drinks my blood
remains in me and I in him.
Just as the living Father sent me
and I have life because of the Father,
so also the one who feeds on me
will have life because of me.
This is the bread that came down from heaven.
Unlike your ancestors who ate and still died,
whoever eats this bread will live forever.”

9 “The ministry of catechesis draws ever fresh energy from the councils. the Council of Trent is a noteworthy example of this. It gave catechesis priority in its constitutions and decrees. It lies at the origin of the Roman Catechism, which is also known by the name of that council and which is a work of the first rank as a summary of Christian teaching. . “12 The Council of Trent initiated a remarkable organization of the Church’s catechesis. Thanks to the work of holy bishops and theologians such as St. Peter Canisius, St. Charles Borromeo, St. Turibius of Mongrovejo or St. Robert Bellarmine, it occasioned the publication of numerous catechisms.

From the writings of St. Peter Julian Eymard as presented by Father John Hardon, S.J.

Of the virtues Our Lord in the Eucharist is now practicing in order to inspire us to follow His example, none is more basic than His poverty. Jesus wanted to be the poorest of the poor, in order to be able to stretch out His hand to the lowliest of men and say to them, “I am your brother.”

Consider…  No man was ever born in more wretched conditions than the Word Incarnate, who had the trough of animals for His cradle, their shelter for His home. As a child, he fed on barley bread, the bread of the poor. In the hidden years He took up the awl and the hammer to earn bread by the sweat of His brow. During His apostolic life He lived on alms. He died in a state of destitution that will never be equaled… stripped of His garments, His honor, His Divinity hidden!

Now that He is risen and glorious, He still takes poverty for His companion… Jesus, dwelling in our midst in His Sacrament, is poorer than during the days of His mortal life! His home is often but a poor church, worse perhaps than the cave of Bethlehem, where His tabernacle may consist of nothing more than four boards, which themselves are worm-eaten! His priests or His faithful people must give Him everything: the matter of the Sacrament, the bread and the wine; the linen on which to place Him or with which to cover Him; the corporals, the altar cloths. He brings nothing from heaven except His adorable Person and His love! Silent, obedient, humbly waiting in the tabernacle for His faithful to come visit Him… for His ministers to take Him out for adoration, to visit the sick, to be viaticum for the dying.

What is Jesus teaching us? He’s teaching us that He is to be imitated twice over: once as the God-man who lived a mortal life in Palestine and once again as the same Incarnate God who is now living His glorified life in the Blessed Sacrament… in poverty, silence, humility, obedience, compassion, merciful forgiveness, love.

Christ is to be followed and His virtues imitated here and now as they are lived by Him in the Holy Eucharist in our midst! The Eucharistic Presence of Jesus is the Mystery of Faith that we are called upon not only to venerate and adore, but to model our lives on in this valley of tears as a condition of reaching our heavenly home.

Poverty, silence, humility, obedience, compassion, merciful forgiveness, love… these can all be described in the one word breaking. “Do this in remembrance of me.” Jesus was broken for us on the cross; and He is broken for us in the Eucharist. Now He asks us to give ourselves, to break ourselves, as it were, for others.

Breaking… This “breaking bread” became the icon, the sign for recognizing Christ and Christians. We think of Emmaus: they knew him “in the breaking of the bread” (Lk. 24:31). We recall the first community of Jerusalem: “They held steadfastly… to the breaking of the bread” (Acts 2:42). From the outset it is the Eucharist which becomes the center and pattern of the life of the Church.

But we think also of all the saints – famous or anonymous – who have “broken” themselves, their own life, in order to “give something to eat” to their brothers and sisters. How many mothers, how many fathers, together with the slices of bread they provide each day on the tables of their homes, have broken their hearts to let their children grow, and grow well! How many Christians, as responsible citizens, have broken their own lives to defend the dignity of all, especially the poorest, the marginalized and those who are discriminated! Where do they find the strength to do this? It is in the Eucharist: in the power of the Risen Lord’s love, who today too breaks bread for us and repeats: “Do this in remembrance of me.”

Questions for Meditation:  How is Christ calling me to be “broken” for others in my life? St. Ignatius gives us these three questions to pray over: What have I done for Christ? What am I doing for Christ? What more can I do for Christ?