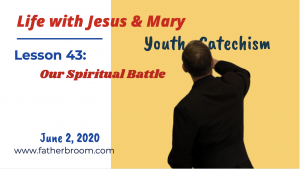 1. What is a temptation to sin?
A temptation is a desire to do something, which appears in some way to be good, but is really evil.

Some people are tempted to steal an expensive pair of shoes, since having the shoes appears to them to be a good.

Instead of leading to happiness, sin leads ultimately to misery. The sinner is always deceived.

2. How can we be strengthen not to sin?
We can keep from committing sin by:

3. What is a near occasion of sin?
Near occasions of sin are all persons, places, or things that may easily lead us to sin.

4. What should we do when we are tempted.

When we are tempted we should first of all say a prayer.

Then, it is often good to do exactly the opposite of what we are tempted to do.

Jesus is more hurt by our not trusting in his mercy, than he is by our sins. We must not give into sadness or discouragement, because this hurts Jesus. St. Therese of Lisieux the night before her First Holy Communion made the proposal, “I will never give into discouragement.”

St. Therese of Lisieux (1873-1897) fond it difficult to get along with a certain sister in her religious community. When Therese was tempted to think of her faults, she would pray for the sister and think of her good points. St Therese then sought to be even kinder than normal to the sister. She even dedicated a poem to her. Therese was able to act so well against the temptation to be impatient that the sister came to think that Therese was especially fond of her. Shortly after her death, this sister wrote a little work entitled the Memoirs of a Holy Friendship, in which she wrote of Therese’s joy every time she went to see her in the infirmary.

St Francis of Assisi at the beginning of his conversion was spending a long time in prayer. One day when he came out of prayer he saw an old hunchbacked women. He heard a sinister voice tell him “You’re going to end up just like her if you continue this way of life.” At that moment young Francis felt a great repugnance for the life of prayer that he had just begun. HE did not feel like praying and giving his life to God anymore. He realized that this was a temptation, so he acted against it. He immediately asked God for the strength and then went back to pray even longer.