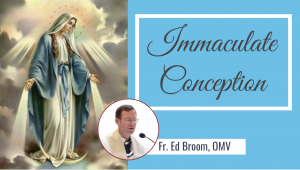 THE REALITY: ORIGINAL SIN. What then is this miracle and privilege that God worked in carrying out the Immaculate Conception? Quite simply it is the following! As a result of Original Sin committed by our first parents, Adam and Eve, all of humanity contracted Original Sin evident in the moment of conception, as the Council of Trent elucidates: “Original sin is not contracted by imitation but by propagation.” That is to say, that in the very moment of conception, in every human person the contagion, the poison, the sin of our first parents is transmitted to us. It is our sad but very real inheritance!

THE IMMACULATE CONCEPTION. In preview of the merits of Our Lord and Savior Jesus Christ, God in His infinite wisdom and providential love desired and willed to enter into the world as a man. However, He so desired to enter into the world in the most pure, innocent, undefiled, sublime and exalted channel. Therefore, He chose to enter through a woman, but a very special, singular and privileged woman: that is, the Blessed Virgin Mary.

PERFECT WOMAN. This woman would be perfect, starting at the very moment of her conception. Therefore, in His Infinite Wisdom, God decided upon this course. Saint Anne and Saint Joachim would be the human instruments to realize and accomplish the Immaculate Conception. Known to be a very holy couple but without children, in their later years God intervened and gave them the greatest gift imaginable—a child, a little girl, the most innocent and holy of all girls: the Blessed Virgin Mary. In the moment of her conception in the womb of Saint Anne, the Holy Spirit intervened in the most sublime and special of manners. This little child was conceived without the stain of Original Sin!

PRESERVATION FROM SIN. The best word to explain this miraculous intervention is the word PRESERVATION. Yes, in the moment of the conception of Mary in the womb of Saint Anne, she was preserved from the stain of Original Sin. She was Immaculate, most pure, most innocent, unblemished, of the most sublime and radiant beauty from the very first moment of her existence. The Protestant English poet Wordsworth expressed it so beautifully: “Mary is our tainted nature’s solitary boast.”

THEOLOGY OF SAINT THOMAS AQUINAS. The Angelic Doctor expounded on the theological reason for the real importance and necessity of this Marian Dogma and sublime privilege. The Thomistic word is CONVENIENCE— meaning both logical and necessary. The reason being that if Jesus, who is the Son of God, were to enter into the world through the channel of a sinful woman, then His Human nature would be tainted and sinful. This indeed would be an abomination. As it is, Jesus entered into the world through the most pure channel imaginable—through His sinless Mother, known as the Immaculate One, all starting with her Immaculate Conception.

THE SOLEMN PROCLAMATION OF THE IMMACULATE CONCEPTION. The privilege and dogma of the Immaculate Conception of the Blessed Virgin Mary was proclaimed in the year 1854 by Pope Pius IX in the Papal Bull Inefabilus Deus.

OUR LADY OF LOURDES. A very interesting and providential occurrence was the appearance of Our Lady of Lourdes, in France. This is an approved Apparition and one of the most well-known of all the approved Marian Apparitions. Our Lady appeared to a sickly and feeble peasant girl, suffering from asthma all her life, Bernadette Soubirous. Our Lady appeared in a small grotto to the little girl—who initially was not believed. The appearances were 18 in total, and it was only in the last that the beautiful woman revealed her identity in these words: “I am the Immaculate Conception.” The little girl, Bernadette, did not even know the meaning of these theological words! These 18 Apparitions took place in the year 1858—only four years after the Holy Father, Pope Pius IX officially proclaimed the Marian Dogma of the Immaculate Conception. It was almost as if God sent His Mother from Heaven in person to solidify and confirm this sublime and indispensable Marian truth.

CALL TO MAKE REPARATION FOR THE SINS AGAINST THE IMMACUALTE CONCEPTION OF THE BLESSED VIRGIAN MARY.

In Fatima, Our Lady revealed to the children the various ways that she was gravely offended. These were the thorns that surrounded and penetrated, piercing and drawing blood from her Immaculate Heart. The first of these offenses was the profanation, abuse and denial of Mary’s first privilege: that of her Immaculate Conception. Out of great respect, devotion and tender love for our Heavenly Mother, we want to desire most ardently to repair for the sins against her Immaculate Conception. Indeed, if somebody insults and offends our earthly mother, we are ready and willing to defend the one who loves us so much and whom we want to love in return. How much more should we want to defend our Heavenly Mother! Therefore, the following are practices that we can undertake either individually or publicly to repair for the offenses against the Immaculate Heart of our Heavenly Mother.

1. SHORT PRAYER. Cultivate the habit of offering this short but fervent prayer to honor the Immaculate Conception. “O Mary, conceived without sin, pray for us who have recourse to thee.” By the way, this is the prayer inscribed on the Miraculous Medal as given by Our Lady to Saint Catherine Laboure in Paris, 1830.

2. THE MIRACULOUS MEDAL. Wear the Miraculous Medal. As said above, this medal was promoted by Saint Catherine Laboure as requested by Our Lady herself. It is also called the Medal of the Immaculate Conception. Wear it around your neck proudly as a sign of your love for Our Lady and her Immaculate Conception.

3. DISTRIBUTE THE MEDALS. Saint Maximilian Kolbe, who loved the Immaculate One and formed the Militia of the Immaculata, called the medals his Spiritual bullets. He carried them and gave them out with the purpose of getting as many people as possible to love Mary, especially under the title of the Immaculate Conception.

These are three short and practical ways that we can all show our great love for Mary under the beautiful title of the Immaculate Conception. May our knowledge, love and devotion to Mary grow by leaps and bounds! May we manifest it by defending the extraordinary privileges that were granted to her by God Himself—starting with her IMMACULATE CONCEPTION. Let us often lift our minds and hearts to Mary and cry out: “O Mary, conceived without sin, pray for us who have recourse to thee.” Our tender love and devotion to Mary will be a sure, secure and beautiful Gateway to our Heavenly Home!

« Previous Post: CONQUER DISCOURAGEMENT: USE OF BIBLE VERSES!
Next Post: HOPE AND TRUST IN OUR LOVING FATHER »