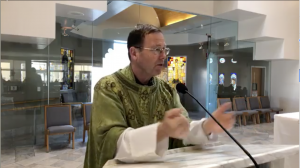 The Deceiver, the ancient serpent, the liar and murderer, demon, devil, Lucifer, Beelzebub, the tempter, the enemy of human nature, the roaring lion on the prowl—all of these names describe the devil both from Sacred Scripture and from the writings of the saints.

The devil’s hatred. The devil is the exact antithesis of God. The Letter of Saint John describes God as Love. The devil, on the contrary, is the epitome of hatred; the devil hates God, he hates all of humanity and all of us individually, and the devil even hates himself.

Fallen angels. Lucifer and the other devils with him are fallen angels. (Rev 12)  Even though the devils are evil incarnate, their intellects are still very keen, though bent on perversity, evil and destruction. Plotting and conniving day and night, the devil strives to use all of his astute strategies and tactics to win souls to himself, to the eternal flames of hell forever. His dastardly and destructive maneuvers will terminate only at the end of time. This being the case, let us offer a presentation of five of the most common tools the devil has in his armory to tempt us, and then five of the most efficacious weapons that we can utilize so as to win the battle—the salvation of our immortal soul and those entrusted to our care and providence.

1. DESOLATION. Saint Ignatius of Loyola reiterates in the Rules for Discernment of Spirits, as well as in the Two Standards meditation, the importance of vigilance. That is to say, we must be constantly aware of the inner state of our emotional life to detect when we are in a state of desolation, for it is then that the enemy of our eternal salvation—the devil and his army—are raising their bows and arrows, their rifles, their machine guns to shoot for the kill! Therefore, with an attentive awareness of being in desolation we can resist the onslaught of the enemy with greater courage and intelligence so as not to succumb to his wily attacks.

2. KRYPTONITE: OUR MAJOR WEAK POINT. Athletes study their opponents so as to detect their weak point and defeat them. In debate, discovering a loophole or weak point in the opponent’s argument  can result in victory. Soldiers use military tactics to uncover the enemy’s vulnerable point open for attack and thus defeat the enemy. So it is with us: we all have our own kryptonite. Why the word kryptonite? Superman was an impregnable fortress with one exception—when he was exposed to the alien mineral kryptonite; then he was rendered as weak as any human being. The desert Fathers coined this pithy adage so useful for our spiritual combat: KNOW THYSELF!

3. SOCIAL ENVIRONMENT/MILIEU. We live in a very challenging environment, more challenging than prior centuries. The work world, the social environment, the social media and entertainment, and often even the family context gives the devil an open door for temptations. For example, with the Internet there is the constant temptation to view noxious and poisonous material; the devil takes advantage of this. Parties can be provocative with immodesty, drink, and the proliferation of drugs. Even at the workplace, the temptation, behind which is lurking the devil, is to fall into dishonesty in so many different shapes, sizes and forms.

4. DEMONIC PROLIFERATION OF IMPURITY. More than 100 years ago, Our Lady of Fatima stated sadly that most souls are lost forever due to the sins against the 6th and 9th Commandments—that is to say: sins against the virtue of purity or chastity. In today’s social milieu, nobody with right reason could fail to admit that this situation has been exacerbated and has deteriorated to an all time low with respect to the virtue of purity. It is true that impurity involves sins of the flesh, but the devil, once again behind the scenes, knows how to stoke the fire with his invisible poker!

5. DEVIL OF DESPAIR. Jesus revealed to the modern mystic-saint, Faustina Kowalska, in “Diary: Divine Mercy in My Soul” that the worst of all sins and offenses against God is the lack of Trust in His Infinite Mercy and the ultimate succumbing to despair. Again, behind the scenes is the nefarious, insidious and malicious presence of the devil and his cohorts. The real and the worst sin of Judas Iscariot was his despair—his failure to beg forgiveness and to trust in the Infinite Mercy of the Heart of Jesus. With the devil in the background, but truly present, many in our modern society have given up all hope and trust in the Love and Mercy of Jesus our Savior and Mary’s maternal power of intercession.

We have exposed to the light five of some of the most prominent temptations of the devil, who in the words of Saint Peter is prowling like a roaring lion, seeking whom he can devour. (1 Pt. 5:8) In all truth, the devil never takes a break, has a sabbatical, or goes on vacation either short or long. He works day and night, in the homes, on the streets, in the work places, in the Churches and monasteries, in all places to win his prize—the eternal damnation of souls! Therefore, let us offer the counterattack, our strategy of defense. We will offer classical, ascetical tools to win the combat against the devil, whom Ignatius calls the enemy of our salvation.

1. FERVENT PRAYER. No matter how powerful, insistent, insidious and astute the devil’s temptations might be, if we have recourse to frequent, fervent, humble and persevering prayer, the victory will definitely be ours over the devil and his army. The best example is Jesus in the Garden of Gethsemane as presented in the movie of Mel Gibson, The Passion of the Christ. Jesus is praying with so much fervor that He sweats huge drops of Blood. Then He rises to crush the devil with the heel of His foot! Prayer can conquer all!

2. PRACTICE OF PENANCE. Jesus was tempted by the devil in the desert for forty days and forty nights. In His trial and sojourn in the desert, Jesus basically dedicated His efforts to two activities: fervent prayer and intense penance—Jesus fasted for forty days and forty nights. As a result, when the devil tried to tempt Jesus in the realm of food, to turn the stones into bread, Jesus responded: “Man does not live on bread alone, but on every word that comes forth from the mouth of God.”  (Mt. 4:3-4) The attempts of the devil were foiled, frustrated, failed miserably. In another Biblical passage, when the Apostles asked the Lord why they could not cast out the devils, Jesus responded: “Those can be cast out only by prayer and fasting.” (Mt. 17:21) Therefore, if we can imbue and permeate our lives with at least small acts of penance and mortification, we can keep the devil and the temptations at bay!

3. PERIODIC SPIRITUAL DIRECTION AND TRANSPARENCY. Both Saint Ignatius of Loyola and Saint Teresa of Avila insist upon the dire need for spiritual direction in the pursuit of holiness. We all have blind spots that can only be detected with the help of a trained spiritual director. However, most especially, it is urgent and indispensable to open up our troubled soul and conscience to a trained spiritual director when we finds ourselves in turmoil, in the midst of a spiritual storm, when it seems as if the roof is about to collapse and the foundation about to crumble. This is the classical Rule 13 in the scheme of the Rules for the Discernment of Spirits of Saint Ignatius Loyola. The devil wants us to keep our temptations hidden; if we do this, the enemy can easily transform a molehill into a mountain, a small cut into a gangrenous infection.

4. A FALL OR FAILURE? BOUNCE BACK! NUNC CAEPI! Being weak and exposed to many temptations, it might be that we collapse and capitulate to the insidious and insistent murmurings of the devil. Only God is perfect and we are all sinners, hopefully on the path towards holiness. A very ugly but ubiquitous attack of the devil is precisely this, that after we fall into whatever sin it might be, we give into despair and lose hope. Or it might be the binge-complex! By this we mean the diabolic temptation that might be expressed as such: “Well, you already fell, why not just fall again and again—drinking, porn, drugs, gluttony, promiscuity, etc.” The true soldier of Jesus and Mary, after a fall will not give into despair, throw in the towel, and succumb to sinking deeper into the mud and quagmire of sin. Quite the contrary! He will humbly admit his fall, have recourse to Sacramental Confession, and start again; in the words of the Founder of the Congregation of the Oblates of the Virgin Mary, Venerable Bruno Lanteri: NUNC CAEPI—BEGIN AGAIN!!! The arms of the Loving Father of the Prodigal Son are always wide-open to receive us!

5. MARY: THE GENERAL OF THE HEAVENLY ARMY. Jesus is the King and Mary is the Queen. In Guadalajara, Mexico, there is a noteworthy title given to Mary: “La Generala del Ejercito”—meaning: The General of the Army! In our constant battle against the devil and his army we must have recourse to Mary. We should be consecrated to Mary, wear the Scapular of Mary, pray the most Holy Rosary to Mary, and most especially, in times of temptation, call upon the Holy Name of Mary. If done, the victory will be ours because of the powerful intercession of Mary! “Maria invoca; Maria cogita!” Invoke the Holy Name of Mary, think often about Mary, and the victory will surely be ours!