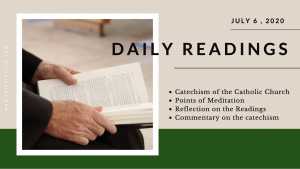 Monday of the Fourteenth Week in Ordinary Time

Thus says the LORD:
I will allure her;
I will lead her into the desert
and speak to her heart.
She shall respond there as in the days of her youth,
when she came up from the land of Egypt.

On that day, says the LORD,
She shall call me “My husband,”
and never again “My baal.”

R. (8a) The Lord is gracious and merciful.
Every day will I bless you,
and I will praise your name forever and ever.
Great is the LORD and highly to be praised;
his greatness is unsearchable.

R. The Lord is gracious and merciful.
Generation after generation praises your works
and proclaims your might.
They speak of the splendor of your glorious majesty
and tell of your wondrous works.

R. The Lord is gracious and merciful.
They discourse of the power of your terrible deeds
and declare your greatness.
They publish the fame of your abundant goodness
and joyfully sing of your justice.

R. The Lord is gracious and merciful.

While Jesus was speaking, an official came forward,
knelt down before him, and said,
“My daughter has just died.
But come, lay your hand on her, and she will live.”
Jesus rose and followed him, and so did his disciples.
A woman suffering hemorrhages for twelve years came up behind him
and touched the tassel on his cloak.
She said to herself, “If only I can touch his cloak, I shall be cured.”
Jesus turned around and saw her, and said,
“Courage, daughter! Your faith has saved you.”
And from that hour the woman was cured.

When Jesus arrived at the official’s house
and saw the flute players and the crowd who were making a commotion,
he said, “Go away! The girl is not dead but sleeping.”
And they ridiculed him.
When the crowd was put out, he came and took her by the hand,
and the little girl arose.
And news of this spread throughout all that land.

34 The world, and man, attest that they contain within themselves neither their first principle nor their final end, but rather that they participate in Being itself, which alone is without origin or end. Thus, in different ways, man can come to know that there exists a reality which is the first cause and final end of all things, a reality “that everyone calls God”.

Note: To understand and appreciate more fully the Mass and Holy Communion, all should watch the Movie in Claymation called “The Greatest Miracle.” Watch it as a family!