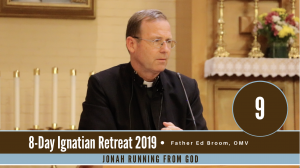 It is couched in between two Minor Prophets, Obadiah and Micah. It is composed of only 4 chapters, with only 48 verses in total; a small book, a minor prophet but with an extremely explosive message—it is the book and the person of Jonah. God summoned Jonah to go to a place he did not want to go, to visit a people he did not particularly like, and to give a message he literally detested—all this to the pagan city of Nineveh!

Jonah’s response to God’s call?  A flat and unequivocal “No!” I will not go! To prove it, Jonah jumped into a pagan ship going in the exact opposite direction. Jonah reasoned that this would solve the problem. God had other plans.  When God wants to carry out a mission, he finds the wherewithal to accomplish it! God sent two unexpected surprises to Jonah: a powerful storm and a huge fish.  Neither of these ever crossed the mind of Jonah.

The storm compelled the sailors to question who provoked it. Jonah pleads guilty.  Then Jonah, cast into the depths of the sea, surmising his life would be snuffed out, finds himself swallowed up by a huge fish in whose belly he remains for three long days and three long nights!